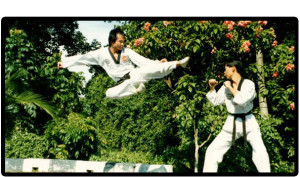 Chief Instructor and Chairman of the Traditional Tae Kwon Do Association. Grandmaster T K Loh practiced under a variety of top Tae Kwon Do grandmasters and masters. Coming from a strong martial arts family background, Grandmaster Loh has acquired considerable knowledge and skills in a variety of martial arts ranging from karate to kung fu as well as lesser known arts like silat and pulculan.
Currently Grandmaster T.K. Loh is a Specialist Orthopaedic Physiotherapist. He has a vast amount of experience in sports medicine as well as an acupuncturist (both body and auricular).

Grandmaster Loh started Tae Kwon Do in his childhood years at the time when Tae Kwon Do was first spread from Korea. During his early days his fame spread as a fighter as he would test his skills against all the other martial arts. He was also a great innovator, one of the first in Malaysia to do the double front kick as well as fourth in the world to do the split kick.

By the time he left Malaysia, as a 2nd DAN, he had learnt all the patterns required in the whole of the Tae Kwon Do syllabus as well as being recommended for the post of International Instructor. He had been the founder and instructor of the TengKu Abdul Rahman (Prime Minister) College Tae Kwon Do Club. He has been the instructor to the armed forces as well as the special branch.

In the UK, he had trained the R.A.F. in the west country as well as establishing Tae Kwon Do clubs. In 1977, he was the English Champion, followed by the European Champion in 1979 and 1980. He was appointed Academy instructor by Ki Ha Rhee 8th DAN. Grandmaster Loh was then appointed as Chief Instructor and Chief Examiner for the World Tae Kwon Do Federation in Britain. He was also in executive committee for the B.T.C.B.(1982 – 1990).

Grandmaster Loh was Head Coach for the 2nd World Games Demonstration Team as well as coach for the 2nd World Games and the 7th World Tae Kwon Do Championships in Seoul, Korea. He was the first person in the world to perform a five target aerial break. Grandmaster Loh was the first in both the UK and Ireland to test for 5th DAN on the floor instead of gratuitous promotions.

Grandmaster Loh 9th Dan, with his experience and knowledge, has maintained the true way of Tae Kwon Do in in the form of the Traditional Tae Kwon Do Association.

He has never devalued the journey a student has to make, the hardships, the joy as well as the steadfast attitude the student has to cultivate in favour of commercialism and sport. Coupled with his medical knowledge and Tae Kwon Do expertise, training in the Traditional Tae Kwon Do has been most effective in producing the highest quality of Tae Kwon Do student.

The standards of the Traditional Tae Kwon Do Association are high and many have fallen by the wayside and only the best will reach the top.