Free Tae Kwon Do for next 2 weeks at Grangemouth High School, See below for details, All welcome 🥋🥋🥋

Posted in Taekwondo News | Comments Off on Free Tae Kwon Do for next 2 weeks at Grangemouth High School, See below for details, All welcome 🥋🥋🥋
Tags: champions, fitness, martial arts, sports, taekwondo

A Fantastic day had by all at the 37th TTA national championships held in Glasgow and hosted by Grandmaster TK Loh the head of the Traditional Taekwondo Association.Falkirk and Callander club won! the championship trophy. Thanks to all competitors and parents for supporting our squad. A great achievement for the club! Well done to all our students for your tenacity drive and bravery!  We won 9 Golds 6 Silver and 4 Bronze medals on the day.

For the children female category we had 2 entries Ruby Morrison and Artemis McIntyre both did well on the day.Ruby overcame a much bigger opponent to get into the final where she won the Gold it was her first sparring competitionwhere she overcame many emotions/challenges which will make her stronger in life. Artemis won Bronze in the sparring andGold in the children patterns, Ruby also won Bronze in the children patterns.
For the female cadet category Toni Kent won Bronze, Toni’s level of patterns knowledge and skill are a great asset to her where she won Gold in the patterns section. Toni also recently passed her black belt grading to achieve the level of juniorBlack Belt.
The female junior sparring category we had 2 competitors Eva Morrison and Emily Aitkenhead, after getting through the semi finals where Eva won the match in the last 5 seconds with a great axe kick to the head they met in the final. Eva won Gold and Emily won Silver and to make their day even more successful they both won Silver medals at patterns.
For adults female sparring category we had the experienced Areti Lymperopoulou and first time in the adults Alex Tweedie just 16 years of age. Areti had a tough match in the final to win Silver, she also won Silver for patterns. Areti also recently passed her black belt grading to achieve her 1st Dan.For Alex’s first adult fight she was against a more mature experienced opponent in the final where she won Gold again in the last few seconds with a great axe kick, she has a lot of potential for future success not only in Taekwondo but in life.First time competitor Charlotte Schmautz also competed in the junior patterns event and won a Bronze for her efforts.
For the male events we had 2 entries in the children sparring category where Jacob Clark met Arlo Cathro-Brownin the final, they had a close fight on the day with Jacob winning Gold and Arlo Silver. For the boys cadet category we had 2 competitors Jonathon Connell who done well for his first competition and just missed the medals, I am sure he will improve for this experience. Samarjit Santhosh won Gold in his weight category with a technical KO he is a true Taekwondo athlete with great potential in future international competitions.
In the junior male category Rhys Clark won Gold for sparring and for patterns, Rhys is planning to do his black belt next year where he will surely do well.

Falkirk and Callander Taekwondo club had a great start to 2019 at the recent british Taekwondo championships held by the Traditional Taekwondo Association led byGrandmaster TK Loh.
We had some new young competitors competing for the first time and they allenjoyed the experience.
We won Silver medal in the team poomsae event where Areti Lymperopoulou won medalswith her daughter Artemis McIntyre and Ruby Morrison. Areti also won Silver in the adultfemale team sparring event along with team mates Dilyana Radulova and Holly Rivett.
For sparring brothers Rhys and Jacob Clark won Gold medals in their respective weight category,Ross Duff also won Gold in the children’s sparring event.In the female individual sparring Toni Kent won Gold and Emily Aitkenhead won Silver.
Overall we received 4 Golds and 7 Silvers, winning best team spirit for our efforts.
Our club trains 4 days a week in Falkirk and Callander, all new students are welcome tocome along and give Taekwondo a try. Contact Duncan on 07713 193841 or email duncirvine@gmail.com.
Here is a photo of our competitors with Duncan Irvine chief instructor of Callander and Falkirk clubs along with Grandmaster T.K.Loh the head of the Traditional Taekwondo Association.

Posted in Champions, Taekwondo News | Comments Off on Taekwondo competitors great start to 2019

Callander and Falkirk Taekwondo club had a great end to 2018 with our youngsters winning multiple medals at the 36th annual British Taekwondo Championships held in Glasgow by the TTA.

Aaron Connelly had a gruelling final bout to win the junior male sparring event he is a young man with great potential to excel in Taekwondo.

The junior female sparring event went to Alex Tweedie who had 2 tough fights to win Gold, she beat fellow club member Emily Aitkenhead who achieved Bronze for her first sparring event, Emily also just missed out on a medal for the patterns event.

Eva Morrison won Gold in the female cadet event this is her 4th consecutive Gold in competition, each year she gets stronger and stronger at these events.

Brothers Jacob and Rhys Clark had close fights just losing by a few points they received a Bronze and Silver medal respectively for their effort. Rhys has great potential for future success in competitions and has a great relaxed attitude to his Taekwondo challenges.

Matthew Johnston had a few tough fights winning his final in the last 5 seconds of the bout with an accurate axe kick to win by 1 point.

Our club trains 4 days a week in Callander and Falkirk, all new students are welcome to come along and give Taekwondo a try. Contact Duncan Irvine 07713 193841 or email duncirvine@gmail.com. Come and join us in our 2019 challenges!

Posted in Champions, Taekwondo News | Comments Off on Taekwondo on a High 2018/2019

Just pop along and give Taekwondo a go all sessions are free! 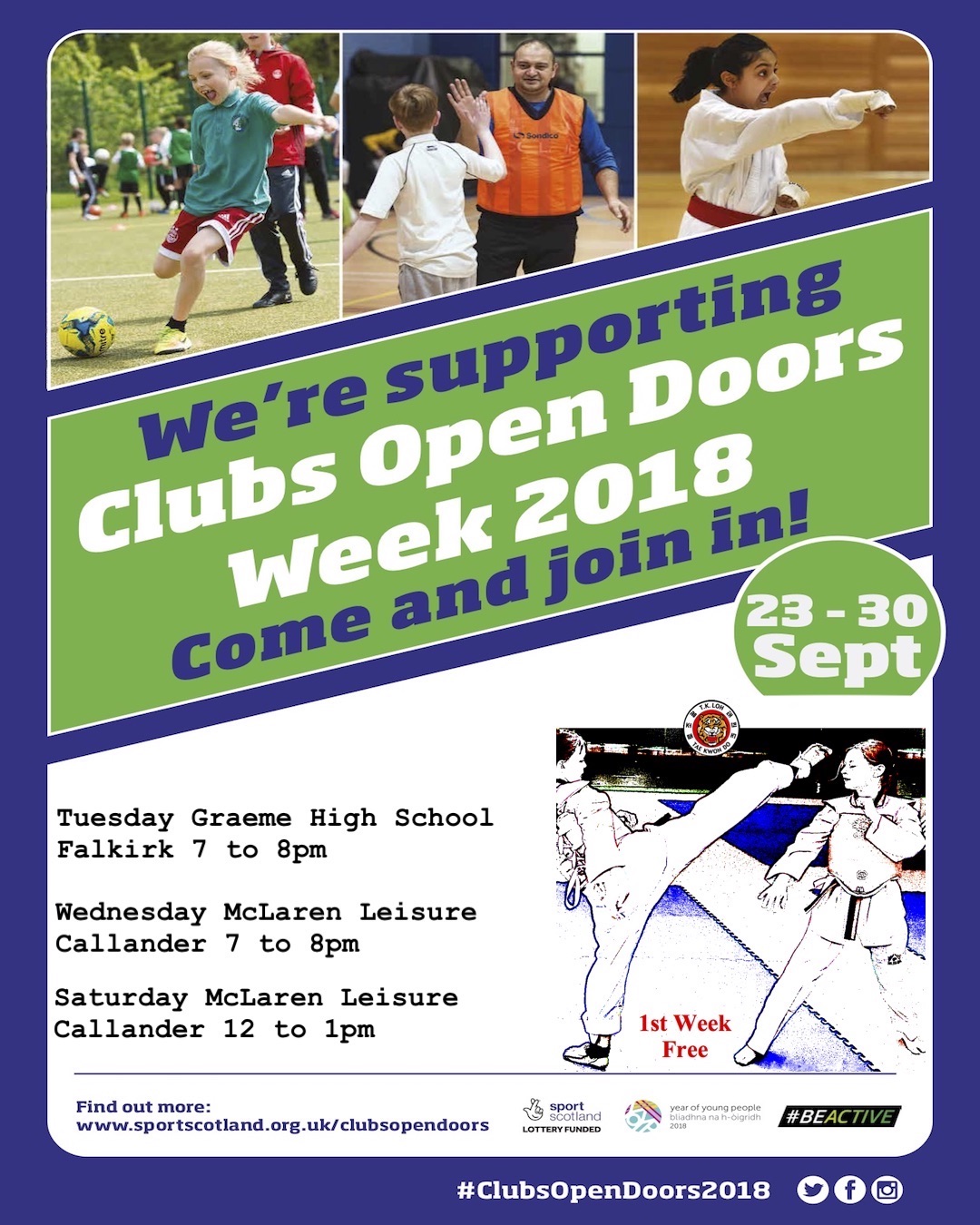 Posted in Uncategorized | Comments Off on TAEKWONDO OPEN DOORS WEEK 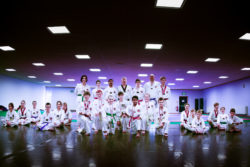 Normal classes up to 30th June.
Callander 12 to 1pm only 17th June.
No classes between the 1st and 14th of July.
Falkirk classes Tuesday and Thursday 7:30 to 8:30pm at Braes High School from 18th July to 17th August.
Callander classes Saturday 12 to 1pm and Wednesday 7 to 8pm from 15th July to 19th August.
Normal classes start back on the 23rd of August.
Check our online Calendar and watch our facebook page for updates.

Posted in News | Comments Off on Summer Training 2017

Falkirk Taekwondo had another successful year in sparring competitions
across Europe.
We started the year in Belgium at the international open
challenge cup, followed by England national open competitions in May and September.
These events use the same electronic systems as in the Olympics
and are a great development path for future elite athletes in Taekwondo.
We also competed in 2 Traditional Taekwondo national competitions
in Scotland held by Grandmaster Loh in May and November.
Our students did a great job representing Scotland in these events and had
some tough opponents during their travels, they are all better for the experience
and will continue to develop their skills in Taekwondo.
For our efforts we gained 10 Gold 9 Silver and 2 Bronze medals plus 2 Team spirit trophies.
Our medal winners are
Juniors:
Elisha Shaw 4 Golds
Jamie Thomson 1 Gold 1 Silver 1 Bronze
John-Jo Paterson 1 Gold 1 Silver
Cadets:
Rory Sneddon 1 Gold 3 Silver
Eva Morrison 1 Gold 1 Silver
Gary Hamilton 1 Gold
Matthew Johnston 1 Gold
Tom McCulloch 1 Silver
Father and Son:
Samarjit Santhosh 1 Silver 1 BronzeSanthosh Kumar 1 Silver
Falkirk Taekwondo training is in Graeme High School Falkirk on Tuesday/Thursday
and Callander Wednesday/Saturday we welcome any new student who would like to develop their self defence skills and build confidence in all they do.

Posted in Champions | Comments Off on 2016 successes

Posted in All, Uncategorized | Comments Off on Time off Summer 2015