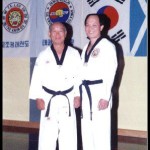 The seminar started with the old scottish tradition of our guests being piped into the event by one of our young students.

Grandmaster Park then commenced the seminar with a warm up, he then covered all the Taeguk patterns and Black Belt patterns stopping at relevant points to explain the movements and the reason for the way the movements are to be performed.

All students who attended learned about their patterns and the purpose of the movement, I am sure that everyone left the seminar with more knowledge and inspiration from such a great modest man.

We ended the day by presenting Grandmaster Park with a traditional Scottish Quaich to remember the event.

Posted in All, Uncategorized | Comments Off on Grandmaster Park visit

At the TTA National team championships in Coatbrige our clubs achievements were again OUTSTANDING we won 11 Golds, 14 Silver and 4 Bronze medals as well as the Best team spirit.

In the children’s category we participated in 8 events and won 5 Golds 4 Silver and 3 Bronze Medals:

Robbie Player won his first Gold and was over the moon with his achievements he had to fight hard for his trophy and is the new under 37kg UK champion he had to beat 3 opponents including his team mate on his way to victory, Daniel Hesp fought Robbie in the semi final but had to pull out due to a foot injury Daniel received a Bronze medal for his efforts.

In the under 40kg category Callum Gray just missed out in a medal when he lost his match by 1 point, he is improving every competition.

We then progressed onto the under 43kg category where Liam Ferguson received Bronze for his efforts and his team mate Scott McCoull won his 2nd Gold medal in consecutive competitions, Scott fought well to win the final decisively.

In the under 25kg category we had sisters Naomi and Tegan O’May up against each other in the final, even though they are sisters they gave each other a hard match with Naomi just getting the better of her sister to win Gold with Tegan winning Silver. After this match Naomi went straight into another final for the under 31kg category and had a hard match against the existing champion where she lost by a few points and won the Silver medal.

Naomi and Tegan are a credit to their parents and club for the dedication they put into their training at least 4 times a week, it will be good to see them in a few more years as they continue to develop.

In the next female category under 44kg we again won Gold and Silver with the reigning champion Anna Holden defeating team mate Eilidh Johnston in a close fought well spirited match.

The next children’s match saw John-Jo paterson getting through to the final and just losing to give him Silver medal position for the under 27kg category his team mate Lewis Witherspoon done well to get a Bronze at his first competition.

Our last children’s match of the day the under 53kg category saw Eilidh Walker retaining her championship crown winning her third successive Gold medal in the last year.

In the Junior’s category there was 5 events with our club winning Gold in 3 of them:

Liam Muir won Gold in the under 45kg category when he beat a tough opponent from Ireland in the final to receive another Gold medal to add to his trophies, this was Liam’s first event in the Juniors and he has a great future ahead.

Ross Walker had two hard fights against team mates from the Harrogate club and came home with another Gold medal for the under 73kg event.

Eilidh Johnston moved up to the Junior event and won her 1st Gold medal for the under 42kg category, this was Eilidh’s first sparring competition and she won a Gold and Silver, we are looking forward to seeing her in the next competition.

In the adult event we also did very well considering a few years back we had no adult teams, this time we had 3 winning 3 Golds and 10 Silver medals.

In the five man Coloured belt team we had 2 sets of players who had to defeat Ayr and Nottingham to meet each other in the final. They both did this after some strong competition from their opponents setting up an all Falkirk final. Although they are team mates they gave each other some hard fights. There had to be winners and for their efforts Ian Hodge Tony Clark and Andy Harrison received Gold with William Ferguson Lee Hesp Sandy Robertson Marek Dzurko and Kenny McQuaide receiving Silver.

The other team event was the Black Belt team, this was only the 2nd competition for our newly formed senior team and they did outstanding, they had to compete against strong opposition from Nottingham to get into the final which they did by winning 3 to 2 against more experienced players. This meant they progressed to the final against the reigning champions Glasgow where unfortunately they lost out on Gold but won a well deserved Silver with matches a lot closer than expected with only a few points separating them from their victors. For their efforts Conan Irvine Kristofer Irvine Ricky Buchanan and Marc Rivett all went home with a Silver. We are looking forward to next year for the rematch.

In the female adult event we had Laura Macdougall competing in the under 67kg category competing against more senior grades she won her 1st two fights convincingly to progress to the final where she won a Silver medal for her efforts. At 16 years old and a Green Belt she did very well to get to the final and has a great future in Taekwondo.

This again was a great achievement, without the help of parents and students it would not be possible to reach these heights! I’d like to thank everyone for their time and dedication which made this event a success.

Posted in All, Champions, Taekwondo News | Comments Off on Taekwondo Championship Results April 2011